skip to main | skip to sidebar

You may remember that a few months ago I did a custom rocket tee for a sweet little girl, Lauren, whose older brother plays baseball. Well, Lauren has another older brother (in fact she's got 4 older brothers), but she has one who plays football for the Rockets. So, naturally she needed a football tee to support her older brother. I decided to use their helmets as my inspiration for her design. They have green helmets with a rocket on the side that says 'rockets' on it. 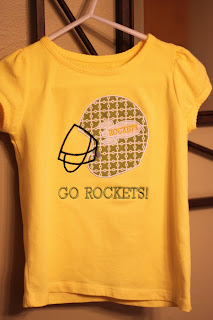 Lauren calls her football-playin brother Jordan, Jor-dee...so, of course I had to put that across the back and his number is 20. 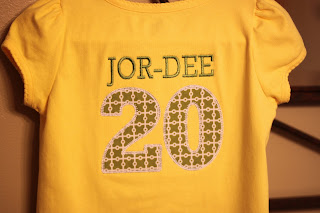 I hope she looks fantastic cheering on her big brothers! I'm certain she does. This girl has got the most gorgeous big curly hair. Lauren's also got a few more orders coming up for the holidays, so there's more in store for her.
Posted by Kate at 1:10 PM 1 comment:

A couple weeks ago a sweet girl from church's son turned 8 and he wanted a birthday shirt. I was delighted to do the order for them. Often times people assume that applique and some of the things I do are only for children that are 5 or so and younger, but it's so nice to get the occasionally 'big kid' order. Ethan said he wanted a BIG 8 on the front of his shirt and his names BIG across the back like a jersey. I was happy to oblige. 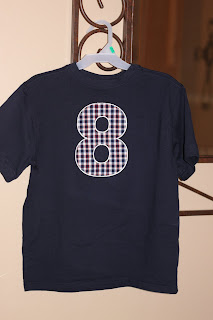 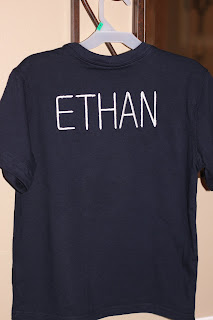 And there you have it...pretty simple, but it made one boy very happy...and that makes me happy. He had an '8 is Great' party...isn't that cute?...and he looked oh so handsome, as usual.
Posted by Kate at 12:59 PM No comments:

We've got some friends who are expecting Baby #2...now! Well, kinda. I'm actually posting this today in hopes that the baby comes today and forever has the birthday 10-10-10...cause that would be awesome. Actually, mom was due on Friday...and I believe will be induced on Monday if baby is a no-show before then. Anyway, I digress...
Since this is Baby #2 for them, that's means their little guy Chase is going to be a big brother. (They are not finding out what the baby is until he/she makes his/her big arrival into the world). So a week or so ago, mom asked me to make a 'big brother' shirt for Chase. However, Chase LOVES sports, especially football, so she wanted a sports themed big brother shirt. The only thing she specifically requested was royal blue. Chase has got the most beautiful big blue eyes and this tee is going to look so great on him! 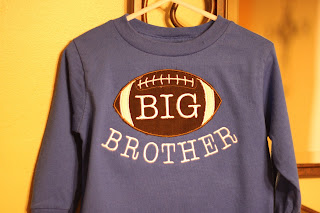 This is the first time I've incorporated a theme into a sibling shirt, and I've got to say it's pretty fun. I think Chase is going to be a fabulous big brother and couldn't be happier for the family. Can't wait to meet Baby #2! 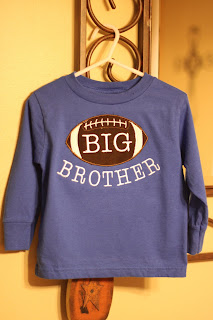 Don't You Forget About Me

Well I figure I better get to work on posting more often or no one is ever going to follow me again. Normally I like to post in order of the way things happen in life, or the way orders come in. But, since I haven't shown you anything cute in a while, I'm gonna switch it all up. For instance, I still haven't blogged about the baby shower I threw for Heather or our trip to Boston. But, I'm in the mood to show you some cute orders over the next couple of days. So I'll get to those things eventually...until then an outfit.
My friend Kendra's baby girl, Kennedy, just turned 1. Kendra asked me if I would do a birthday outfit for her. A couple months ago when Just Ducky had their big warehouse sale she picked up a plain white top and pants, she passed those on to me to 'dress up' for the outfit. When I sat down and talked with Kendra about what she wanted for Kennedy's outfit she said "Pink, Pink, Pink!" So, I took this outfit home and said that I would work some magic and jazz it up. We decided that she wanted a 1 with a crown like I have done for a couple other birthdays, as she was having a princess party too. And, of course, Kennedy's name would be on the top. Then she was thinking, perhaps put some ribbon or rick-rack on the white pants to give them a little something. In hindsight I wish I had taken a before picture of the outfit, but I did not. So I'll start by showing you her top. 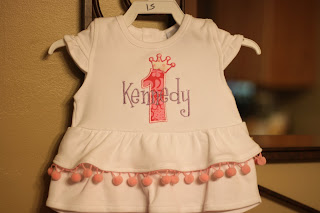 Both Kendra and Kennedy are girly-girls, so I thought you can never go wrong with pom-poms for a girly-girl, right? So, on to the pants. I decided to gamble big where the pants were concerned. I knew that she was going to have professional pictures of Kennedy made in this outfit, and I had an inkling that the background would be solid white, as it is with most picture places. And, I kept thinking about how Kendra wanted PINK, PINK, PINK. So I didn't touch the white pants. I made her a new pair of pink, pink flounce pants. 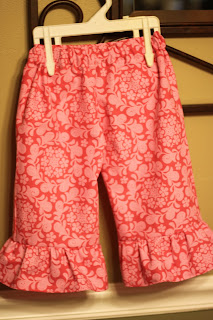 Not bad, eh? Well it turns out Kendra absolutely LOVED it! Kennedy looked super cute, of course. But, I think it's a pretty cute outfit, here it is altogether. 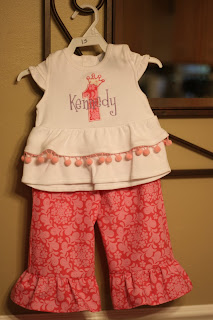 I told her we could do something cute with the white pants for Christmas, so perhaps you'll see them in the future. We'll see.
Posted by Kate at 8:25 PM No comments:

Many apologies for being such a slacker. Furthermore, I've been the worst aunt on earth. I haven't told you about my new sweet nephew, John Henry McIntyre. He was born on August 11. 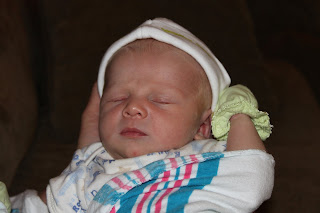 Isn't he precious? Here he is with Uncle Nathan. 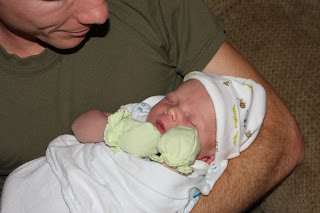 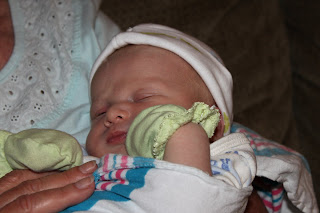 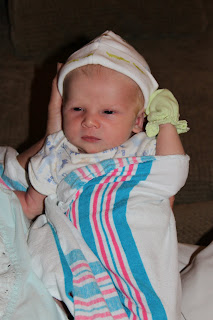 And with my mom, his Annie (that's her grandmother name). 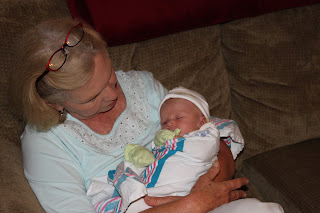 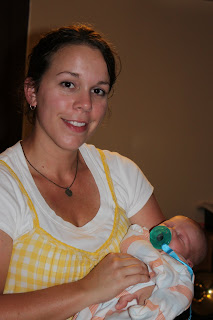 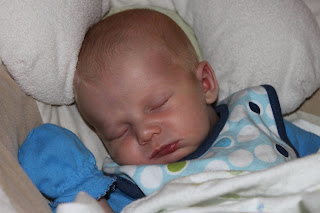 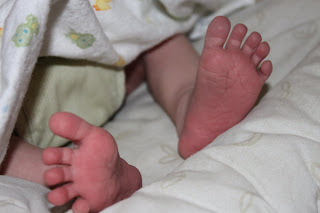