skip to main | skip to sidebar

I can't even stand how long it's been since I've blogged. There was a reason I stopped, it's because I became pregnant. I kept trying to think about how to talk about it, and I had so many of my own issues to work through at the beginning. Most notably was my guilt over being pregnant, but still knowing sweet girls who were unable to get pregnant themselves. Then, I started my new job at Chick-fil-A and was quite sick through the first trimester. Then, I didn't blog because of guilt over not blogging. Then, I didn't blog because I wasn't really making anything. Are you seeing the pattern...the ridiculous snowball of a pattern? Just ridiculous. Well now, it's been so long that I'm going to let the past be the past and just start anew.

So, yes, I'm still pregnant. My due date is tomorrow, even though it seems as though Karis is not at all concerned about things like that. I was really hoping to have her this past weekend, and yesterday was really hard for me as I realized it wasn't happening. This morning I woke up with new resolve and I think it'll be a couple days still. I have an appointment in the morning, so we shall see what the doctor says.

Now that all of that is out of the way, I'll just go ahead and jump back into things. I'll share with you a project I made back in May. I was asked to make a diaper bag for a sweet girl at church. I kept going back and forth about what style, shape, size, etc. This is her third baby, but first boy. So I decided that with 3 kids, a bigger bag would be more practical. This is what I settled on. 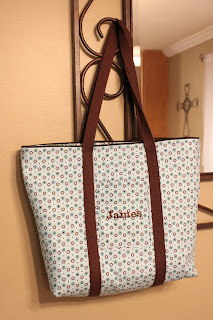 I used the Spring Market Tote pattern from Homemade by Jill. However, I added a pocket to the outside and a few pockets on the inside. 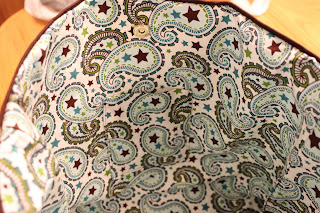 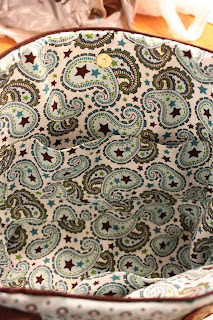 I know there aren't many details here...but it's something. I will work on getting back with you with more in the future. Until then...
Posted by Kate at 3:44 PM